Thanks to Harvey Gotliffe for sending me this info.

This is a good link to have to automatically see what table tennis competitions are happening in the near future in California.

The next big one is in Sacramento. Note the deadline for entry is May 9.

This was a super fun league night with a lucky 13 doubles teams playing on four tables and our first mixed-doubles event and first double-elimination format for tables with three teams.

A little housekeeping: if you are not receiving the club emails, please send me your email address at jim @ jimlangley dot net

I want to give a big thanks to David Bergevin for preparing the beautiful match sheets for all the tables and Jane for bringing some tasty treats. And mega thanks go to Wireless who actually didn’t have a teammate to play doubles with – yet still went to the trouble to (I’m still not sure how he did this) bring a large-screen laptop to the club and somehow stream live the first Warriors game! It was awesome having our own little doubles world championship while being able to watch the Warriors play in theirs!

Table 1 consisted of the best 3 teams: PD and Shrikant from the Monterey/Seaside club, Steve (also from the M/S club with Mickey, and Joey and Victor.

Table 2 (Coed-Division) saw Pat and Barry, Suzanne and George, Crystal and Ari and Sharon and Jane battling it out.

Table 3 was Craig and Jim versus Bob and Ron and Ed and Ray. Great to have Jon back in the house!

Table 4 saw some exciting action with Max and Paco, Sebastian and Willie and Thom and Charlie driving down from their secret Bonny Doon ping pong training camp.

On table 1, I enjoyed a Victor/Joey vs PD/Shrikant game, where, with a series of perfect Victor chops and Joey loops, their team came back from a 0-8 deficit to tie it up before PD and Shrikant rallied to take control.

Meanwhile on table 4, the Dooners Thom and Charlie were the only teammates with cool matching ping pong shirts and most of the matches went 5 games with Sebastian showing his stellar placement skills from all his tournament play.

On our table (3), it was great having Bob and Jon back after injuries have kept them from playing for some time. They both hit some nice winners.

Champions on the night were:

Thanks to everyone who participated!

Last night we filled 6 tables, had our first women’s mini tournament on table 5 (congrats Pat, Sharon and Suzanne!) – and we tried Dave’s alternative for 3-player tables to give everyone more matches to play (thanks Dave!). Appreciate everyone monitoring their own tables and keeping score, which allowed me to play. Also, it was nice of everyone to let latecomers Ari and Dave squeeze into the round robins.

Craig
Could not read score sheet to pick other places – sorry 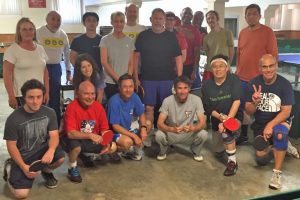 Thanks everyone for another super fun league night – official league photo attached!! Don’t we look marvelous? Feel free to share on your channels.

High fives to Dave Bergevin for the design work and printing of our amazing match sheets (they even show which player scores each match – and soon we will have enough score cards for every table). Dave also bought and brought all the tasty treats. Wow, thank you Dave!!

More thanks to all who arrived early to setup and for everyone who came to watch and cheer us on.

I appreciate everyone handling their own table last night, which allowed me to play. That was great and I hope it didn’t cause any issues for anyone. If so, let’s talk about it. If anyone has ideas or questions or improvements for next time (date to be determined later but it will be more than 2 weeks this time), please pass them along. Let’s keep the league fun for everyone.

ONE CHANGE we will try to implement is to make sure we have at least 4 players per table. The 3-player tables last night ended too quickly and I think players would have liked more matches.

Congratulations to all players. The matches were fiercely competitive.

First SCTTC tournament was a success

Thanks to Jim Langley and most of the SCTTC club, the first monthly tournament was a great success! I had a great time after getting over the nervousness of “competing” for the first time. For those who didn’t see Jim’s email:

Thanks everyone for attending the league and making it so much fun. We had a total of 20 players on 5 tables and every match and table was competitive. In fact, after everyone left, David Bergevin – who has run lots of volleyball round robin tournaments – and I, had to put our heads together to figure out the results on some of the tables because we had 3-way ties on several of them. That shows how competitive each round robin was.

Table Winners for our first league were:

I want to repeat that most of the tables were so closely contested that only a few points would have changed the outcome, so you all are winners. We did not calculate 2nd, 3rd and 4th place. We only figured out who had the most wins and most losses on the tables so that we would know who changes tables next time.

We are closed the first week in May, so the next league night will be Thursday, May 12th.

Sacramento Tournament on May 11

Entry with check due by Fri 5/3. See link for PDF entry form.
http://www.teamusa.org/USA-Table-Tennis/Events/2013/May/11/Sacramento-Spring-Open.aspx