I forgot this was happening, but you can see the weekend live streams at https://www.youtube.com/@USATableTennis/streams

There are more games through Dec. 21, but uncertain which games will be on YouTube.

Happening in Southern California in December! Check out the USATT page for more details and link to sign-up.

Found a site that lists competitions/tournaments around the country: Omni-Pong

Just saw that it is still possible to enter the competition through today, 4/20, but I couldn’t find details.

Too late to enter the competition now, but tickets are available. Best part is that it’s happening in Fremont. We don’t yet know the competitors list, but USA Olympian, Lily Zhang, will be there (it’s at Table Tennis America, her club).

Not sure why they decided to keep calling it Tokyo 2020, but here we are in 2021. I think the best page to see the TT schedule. I’ll be rooting for USA, but our team will be outmatched most of the time. The Men’s brackets list is here. Looks like the best place to watch online or find out where to watch would be nbcolympics.com. Discovered that Hulu has a week-long free trial which let’s you see a lot of the games without paying (just don’t forget to cancel at the end of the week). If anyone has other options, let me know. I’m hoping that the best games will appear on YouTube, but who knows.

Thanks to Harvey Gotliffe for sending me this info.

This is a good link to have to automatically see what table tennis competitions are happening in the near future in California.

The next big one is in Sacramento. Note the deadline for entry is May 9. 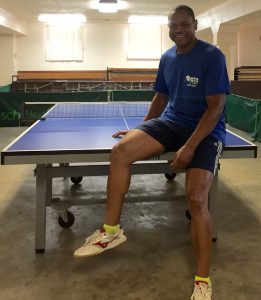 This was a super fun league night with a lucky 13 doubles teams playing on four tables and our first mixed-doubles event and first double-elimination format for tables with three teams.

A little housekeeping: if you are not receiving the club emails, please send me your email address at jim @ jimlangley dot net

I want to give a big thanks to David Bergevin for preparing the beautiful match sheets for all the tables and Jane for bringing some tasty treats. And mega thanks go to Wireless who actually didn’t have a teammate to play doubles with – yet still went to the trouble to (I’m still not sure how he did this) bring a large-screen laptop to the club and somehow stream live the first Warriors game! It was awesome having our own little doubles world championship while being able to watch the Warriors play in theirs!

Table 1 consisted of the best 3 teams: PD and Shrikant from the Monterey/Seaside club, Steve (also from the M/S club with Mickey, and Joey and Victor.

Table 2 (Coed-Division) saw Pat and Barry, Suzanne and George, Crystal and Ari and Sharon and Jane battling it out.

Table 3 was Craig and Jim versus Bob and Ron and Ed and Ray. Great to have Jon back in the house!

Table 4 saw some exciting action with Max and Paco, Sebastian and Willie and Thom and Charlie driving down from their secret Bonny Doon ping pong training camp.

On table 1, I enjoyed a Victor/Joey vs PD/Shrikant game, where, with a series of perfect Victor chops and Joey loops, their team came back from a 0-8 deficit to tie it up before PD and Shrikant rallied to take control.

Meanwhile on table 4, the Dooners Thom and Charlie were the only teammates with cool matching ping pong shirts and most of the matches went 5 games with Sebastian showing his stellar placement skills from all his tournament play.

On our table (3), it was great having Bob and Jon back after injuries have kept them from playing for some time. They both hit some nice winners.

Champions on the night were:

Thanks to everyone who participated!